Driven By Hope is Toni Lumbrazo Luna’s third book of poetry. It contains glimpses into the lives of people she has met throughout her career as a Social Worker and Life/Career Coach. These poems are based on real life and Toni takes them to new places inside her imagination. Perhaps you will see yourself through her eyes. Order Driven By Hope here.

“What is adventure in the time of Google Maps? If hardship is what separates an adventure from a vacation, how does one reconcile the ease of travel with the challenges one faces?” Matthew Eiford-Schroeder wrote the poems in Consistently East as he emerged from the fog of a brain injury he suffered as a result of a violent attack. Join the poet on his global travels from Brooklyn, New York to London, across Mongolia via a charity rally, then on to Seoul, Korea. After returning to the West Coast of the United States to visit his family, Matthew attempted to work the oil fields of North Dakota before finally returning to Brooklyn, where he was assaulted. “I wrote these poems when the world stopped shaking enough for me to collect and organize words again. I had to rebuild myself, take an inventory of memories, then create. To begin to live in a world that had changed in a self that was no longer the same, but both not completely severed from the trauma and beauty of the past.”

“If art is animated by the shock of the new, Matthew Eiford-Schroeder has presented the reader with a top grade set of jumper cables. Consistently East is a startlingly good and often brilliant book of poems, one that makes harmony of its surface contrasts. Radical and clear in its language, cosmopolitan and Northwest homegrown in its intellectual sensibility, powerful in the way it interrogates the modern nature of power, it is a book that exemplifies the best verities of American travel literature by taking a hammer to the clichés of the genre at its worst. Reaching to both Whitman and Milosz, Consistently East is a book of the first rank that deserves to be read by as many people as possible.” Robert Lashley, Stranger Genius Award Nominee and author of The Homeboy Songs and Up South.

“Traveling roads in between two stages of apocalypse, here is a friend’s diary written on a hostel wall. Through poetry, we relax into the same curiosity and fear of the wanderer, his flashbacks becoming ours. Love, insight, and invitation command this collection. And the revelation that our memoir is safest in the hands of a madman.” – Tongo Eisen-Martin, author of Heaven is All Goodbyes (City Lights), winner of the 2018 California Book Award for Poetry.

Matthew Eiford-Schroeder was raised in Camas, Washington, where he spent a sizable portion of his time working and playing on his grandparents’ cattle farm. He moved around America, working retail and lifting heavy things, before eventually landing in New York, where he snuck into an art school and became a bouncer.  He currently lives in Bellingham, where he is studying political science at Western Washington University.

Meet Me Where I Left You, the debut collection of poetry and short prose by Tiffany Burba, captures her real and imagined New York City adventures of love, lust, museums, jazz, food, and running in Central Park. She has an amazing love affair with the City and its inhabitants stretching from Brooklyn to Queens, the Bronx to Manhattan, and all points between. Living on whiskey kisses, a subway pass, and everything from pizza to soup dumplings, Burba fills and breaks her heart and ours along the way. Meet Me Where I Left You explores her arrivals and departures, her dreams of leaving Pacific Northwest forests for the taxi rides and street grime of New York City, her love of family and friends, and her unashamed quest for passion.

Order Tiffany Burba’s Meet Me Where I Left You here.

Advance Praise for Meet Me Where I Left You

Tiffany Burba is a generous storyteller cursed with a muse that won’t sit still. Her work is more than a simple love story or an homage, though.  Her poems are as much a part of her being as perspiration or tears. In Meet Me Where I Left You, the love is real, the hurt is real, the longing, the sadness, the courage, all of it is real. Tangible. “Soup Dumplings” and “Recovery” speak loudest to me, though the exercise of picking favorites from this book is akin to picking favorite waves in the ocean.

In Meet Me Where I Left You, Tiffany Burba creates brave wordscapes of love broken, love restored, and dreams of New York. With vast humanity and invincible heart this collection does what great poetry always does: it heals us.

The honest exposure of needs, desires, and relationships thrown against the bustling backdrop of The Big Apple grabbed my attention. Taste and walk your way through a birthday trip to New York City, through the eyes and heart of a fiercely passionate woman searching for a love that will join souls into one eternal, burning star. The raw energy and pure need revealed in the author’s unveiled prose will sting, searing a striving silhouette of hope between these pages.

GHOST TOWN POETRY VOLUME TWO (2013) is the second book of poetry from the popular monthly reading series at Cover to Cover Books in Vancouver, WA

A collection of poets from the popular second Thursday open mic at Cover to Cover Books in Vancouver, WA co-hosted by Christopher Luna and Toni Partington. This anthology collects a mere sampling of the hundreds of unpublished and renowned poets who have read at the popular poetry series that spoken word legend Jack McCarthy proclaimed “the best open mike between Tacoma and Berkeley.” Founded by Christopher Luna at Ice Cream Renaissance in 2004, in 2007 Ghost Town Poetry relocated to Cover to Cover Books, where it became a crucial component of Vancouver’s growing literary community. (In 2015 the series relocated to Angst Gallery.)

Edited by Printed Matter Vancouver co-founders and current series co-hosts Christopher Luna and Toni Partington, Ghost Town Poetry contains poems that were read at the open mic as well as new work. It also features cover art and a history of the series by Christopher Luna as well as a chronology of the featured readers who have traveled from around the country and the Northwest to share their work.

Ghost Town Poetry Volume One can be ordered here.

SERENITY IN THE BRUTAL GARDEN (2012) by Jenney Pauer

This stunning debut by Vancouver, WA poet Jenney Pauer is a moving collection of poems about sorrow, joy, and family. According to Northwest spoken word legend Jack McCarthy, “If George Eliot were alive today and writing poetry, she would sound a lot like Jenney Pauer. There is an unforced elegance in virtually every line she writes. My immediate response is to stand back and salute.”

Jenney Pauer is a graduate of Southern Methodist University, where she studied theater and English literature. After serving four years in the United States Army as a Korean linguist, she obtained a Secondary English Education degree from the University of Wisconsin-Madison. Before moving to the Pacific Northwest with her dog and cat in 2008, she taught high school English along the border of Arizona and Mexico. Recently, Jenney co-wrote a short film, Nico’s Sampaguita, accepted into the 27th Annual Asian Pacific Film Festival in Los Angeles, and soon to be released by Sacred Fire Films in San Francisco, California.

Serenity in the Brutal Garden can be ordered here. 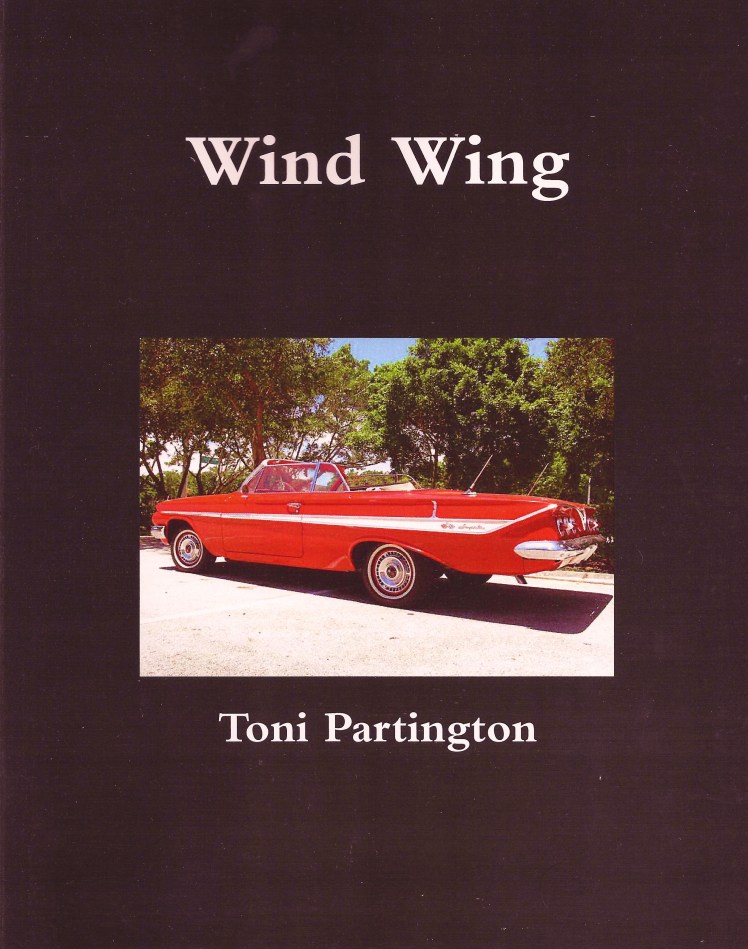 WIND WING is a collection of poetry inspired by the lives of women. The poems provide a glimpse into life on the edge of mental illness, transition and discovery. In three chapters, the poems expose the life of an only child with a mentally ill mother, the transitions of life, love and loss, and the societal and personal observations that lead to self discovery. Partington wrote the book over the past ten years as a way to reveal the stigma associated with mental illness and its impact on families.

WIND WING is currently available as an eBook: https://printedmattervancouver.com/2012/07/08/toni-partingtons-wind-wing-is-now-available-as-an-ebook/

The poems in Brutal Glints of Moonlight were created using material found in Norman Mailer’s 1980 Pulitzer Prize-winning novel The Executioner’s Song. Luna was among 85 writers who remixed one of the Pulitzer Prize winning novels in April 2013 at the request of Found Poetry Review.

Brutal Glints of Moonlight is available from the author: christopherjluna@gmail.com.

In 2003, New Yorker Christopher found himself in Vancouver, WA, wondering how he got there and missing home. He began collecting his observations of his new home in a notebook that became Ghost Town, USA, a diaristic investigative poem about the city often written in real time while walking around town or taking public transportation. This 72-page chapbook represents the first seven years of Luna’s adventures in Vancouver, the place he nicknamed Ghost Town because one can often walk through town in the middle of the day and not see a single person on the street. Luna incorporates humor, social commentary, and overheard conversation into his attempt to capture snapshots of day-to-day life in this suburb just across the bridge from Portland, OR.

Bootstrap Press founder Derek Fenner comments that “Ghost Town, USA moves with a true agitation of the mind.” According to David Meltzer, the book “recalls Williams in his need to transcribe speech.” Eileen Elliott, author of The Prodigal Cowgirl notes: “Chris Luna makes brave darting forays between at least two worlds: the found poetry of city buses and overheard madness posing as stand-in-line conversations, and ekphrastic poetry celebrating works of art such as tattoos, navel piercings, and the way the wind blows the hot dog man’s napkins in the breeze. He comments on living, breathing acts of beauty, leaving them with their dignity and me with deeper understanding. He communicates, straight and pure, like  an arrow to my heart, shaving off its toughness and leaving me vulnerable and new.”