Printed Matter Vancouver would like to thank Jim Martin, April Bullard, Rob Gourley and Jenney Pauer for representing Vancouver at Dan Raphael’s Market Day Poetry Series on Saturday, June 9. The series, which spans 22 weeks and features a different host each week, takes place at St. Johns Booksellers (8622 N. Lombard, Portland), a great independent bookstore owned and operated by Nena Rawdah. For more information, go tohttp://www.stjohnsbooks.com/ We would also like to thank Dan Raphael for curating this amazing series and Nena for having us. St. Johns Booksellers is simply one of the most enthusiastic and consistent supporters of local poets in Portland.

Below you will find information about each poet, an example of their work, and photos from the event:

April Bullard resides with her husband aboard their houseboat near Vancouver, Washington. She admits to 50 years of age, over 30 years of marriage, mother of 3, grandmother of 2, navy veteran, and a fondness for absinthe. She creates work inspired by living cradled on the Columbia River as an artist, photographer, poet, and musician. Her work continues to be exhibited in numerous galleries, and businesses in the Vancouver/Portland area. Her paintings have a home at Cover to Cover Books & Espresso, in Vancouver, WA. Published cover art includes: Cover of Darkness (May 2011 and Jan 2012), Potter’s Field 4, Aoife’s Kiss (Dec 2011), and parABnormal Digest #3, all from Sam’s Dot Publishing. Published author credits include parABnormal Digest #2 and #3, Shelter of Daylight Autumn 2011, and two pieces forthcoming in Cover of Darkness June 2012, all from Sam’s Dot Publishing. For more info, visit: http://www.aprilbullard.com

From the beach, I watch you walk

The afternoon sun behind you

In a living aura of flaming gold.

Details of your shadowy side.

Your fingertips caress the surface of the water

Sparkling diamonds wandering on the current.

For an instant, you are a god.

The pure, blazing energy of life surrounds you.

Moving through the refreshing black cold of space.

Or flick of a finger

Through the celestial eddies of infinity,

Until their fever fades into oblivion. 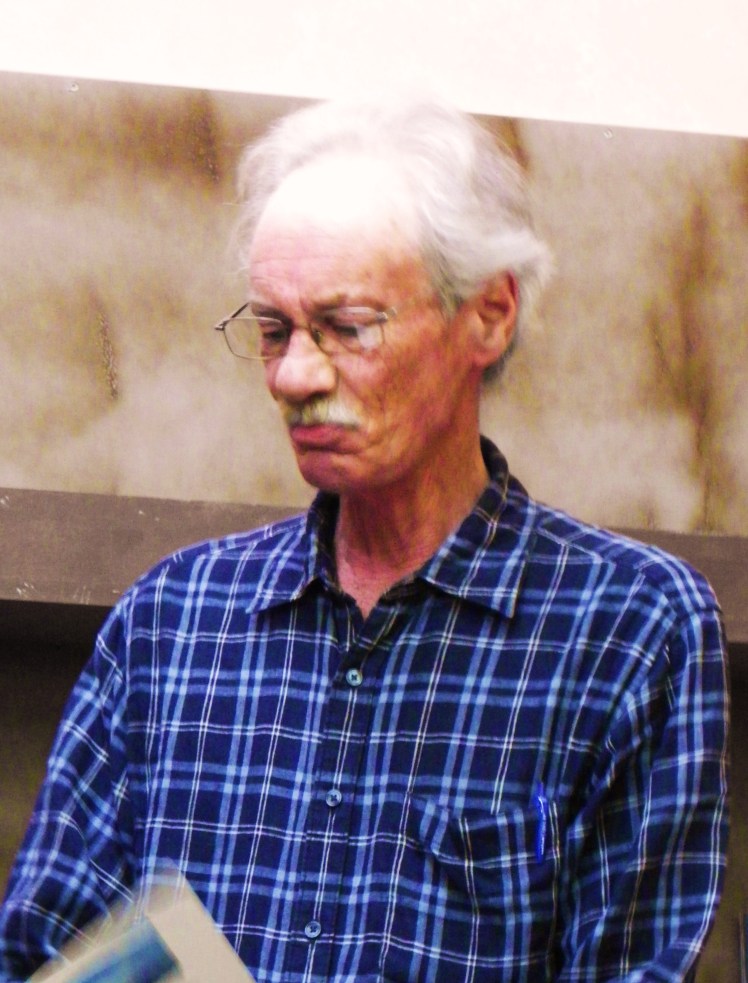 Rob Gourley: Educated in Antioch College and Central Washington University, my employment career has consisted of 17 years as Teacher/Counselor in Washington schools and another 17 years as Locator/Surveyor in an auto processing company at Port of Portland intermodal transportation facilities, where I operate a Teklogix scanner or sometimes install software upgrades via G-scan equipment.

As for the craft of poetry, I was fortunate to have studied under the guidance of professors Milton Goldberg and Nicholas Crome, to have participated in an afternoon seminar session given by Gary Snyder, and to have meditated with supervision of zen master Bishop Nippo in the early 70s. During recent years my avocation has been listening/performing in various open-mic events of the Portland metro area. I’ve followed deer trails upstream in the following watersheds: Rivanna River (VA), Little Miami R. (OH), Puget Sound & Columbia R. (WA). After the canoe was stolen, I sold the paddles.

Rob Gourley reads from a chapbook created especially for the event at St. Johns Booksellers

which includes a brilliant tribute to Miles Davis

… Caught myself recollecting the names

of those encountered through the dream,

before eyes opened to the light,

as if listing for some index –

put Baker closer to the front.

It was but an illusion that

a scene could be revisited –

the dream was not a DVD.

Finding the place I wanted brought

Giving up, I became awake

listening to bird trills outside,

rolled out, and stepped into jeans.

On the south porch by glass windows

Jim Martin: Have you ever had a thought that wouldn’t be tamed? I have, and it won’t leave me alone. I’m a retired biologist and teacher, who spends his time with family, volunteers at animal shelters, does advising and board work in science inquiry education, dances tap and ballet, writes and reads poetry at open mikes, and makes and exhibits photographs. And thinking about who we are and why. 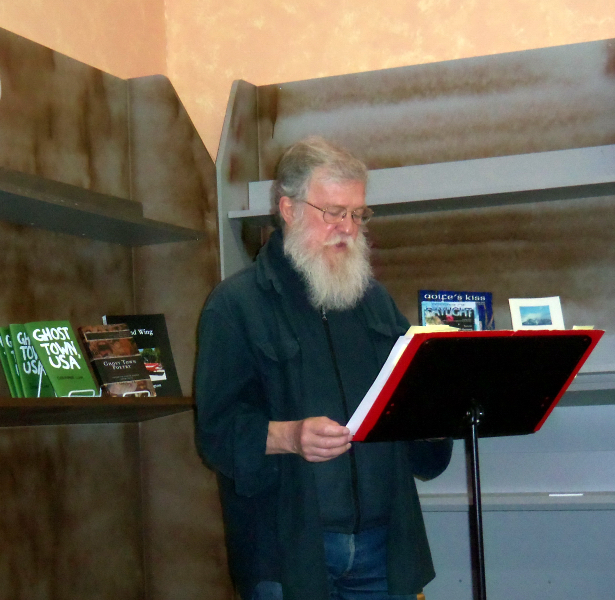 close to the ground

low to the ground

the joy of altitude

Jenney Pauer reads from Serenity in the Brutal Garden

Jenney Pauer is a graduate of Southern Methodist University, where she studied theater and English literature. After serving four years in the United States Army as a Korean linguist, she obtained a Secondary English Education degree from the University of Wisconsin-Madison. Before moving to the Pacific Northwest with her dog and cat in 2008, she taught high school English along the border of Arizona and Mexico. Recently, Jenney co-wrote a short film, Nico’s Sampaguita, accepted into the 27th Annual Asian Pacific Film Festival in Los Angeles, and soon to be released by Sacred Fire Films in San Francisco, California. Serenity in the Brutal Garden (Printed Matter Vancouver, 2012) is her first book.

Fa Mu Lan is a name from the past,

even if today she is a stone in the woods

waiting for a hand to push her into motion,

she will not roll out into the sun

and grab her sword

and shout out her name

to fight men on the Internet

and women on diets.

She will be at a loss will she not?

Where is the battleground she knew?

Where is the tablecloth

stretched from the skin of her father

that urged her into war

It is hanging on a wall in the

preserved behind a glass case,

and people pass by it quickly

so they can get a look at the body of the

And Fa Mu Lan waits as a stone so that

beetles may nest and turn beneath her

and birds can hit her with their beaks

and shit on her.

She is an old woman left in a room

taught to forget even how to ask a question.

Give her some water. 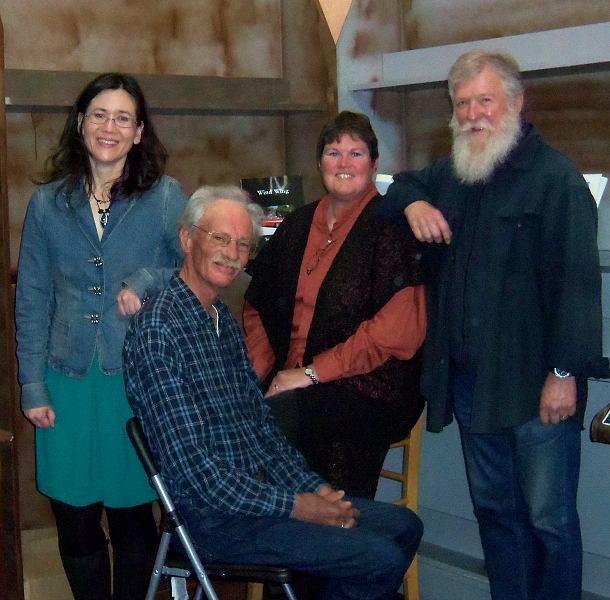 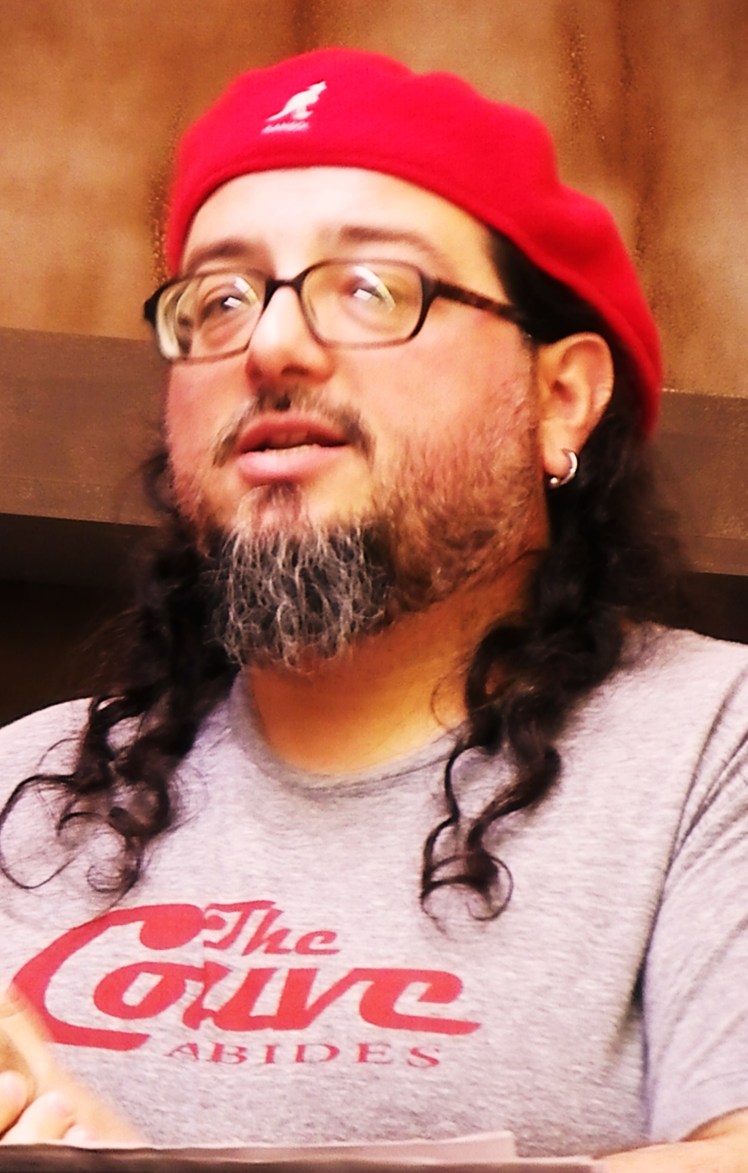 Christopher Luna is the co-founder, with Toni Partington, of Printed Matter Vancouver, whose books include Ghost Town Poetry, an anthology of poems from the popular Vancouver, WA open mic reading he founded in 2004, and Serenity in the Brutal Garden, the debut collection by Vancouver poet Jenney Pauer. His books include GHOST TOWN, USA and The Flame Is Ours: The Letters of Stan Brakhage and Michael McClure 1961-1978, an important piece of film and literary history that Luna edited at Brakhage’s request, available on Michael Rothenberg’s Big Bridge.org. 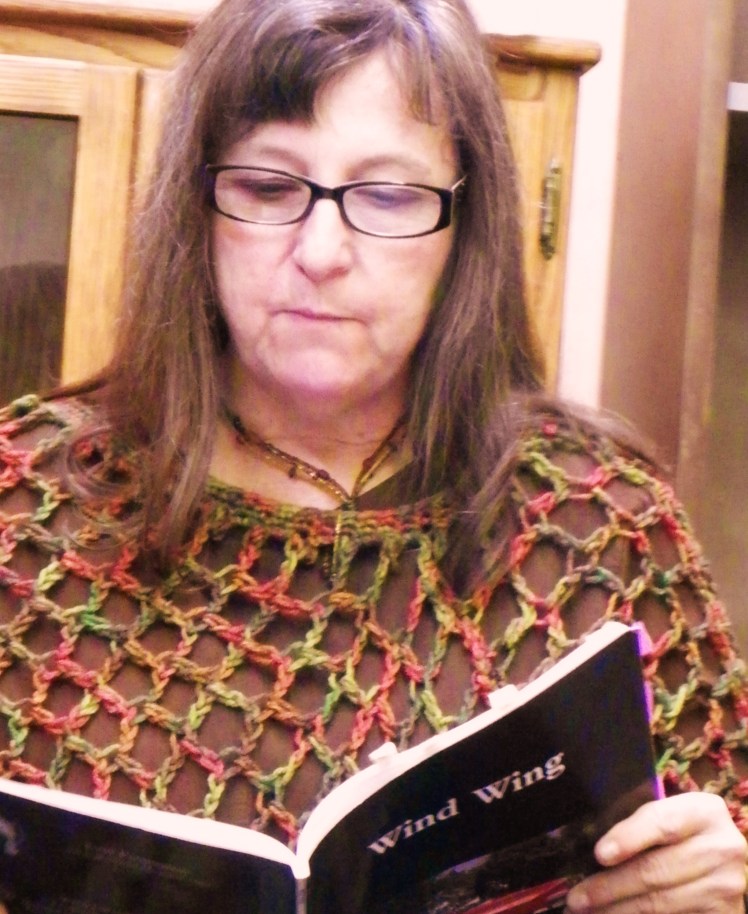 Toni Partington: I’m a poet intrigued by the investigative process. I work with the narrative form to explore social commentary. I’m always looking for the “sweet” spot between poetry and art where collaborations find a common voice. Vancouver, Washington is my town and visual, literary, musical, and performance arts are my mission.

Printed Matter Vancouver is proud to report that the reading at St. Johns Booksellers was only the first of two Vancouver showcases we were invited to host in Portland this summer. Please join us in Director Park (SW Park & Yamhill) on Monday evening, July 9 for Poetry on the Piazza, a series of outdoor readings organized by David Abel of the Spare Room Collective. Christopher Luna and Toni Partington will be joined by Vancouver poets Kori Sayer and Jenney Pauer. Live painting by Gallery 360 member DaBat. For more info: http://www.portlandonline.com/parks/index.cfm?c=52454

One thought on “Ghost Town Poets present their work at St. Johns Booksellers”