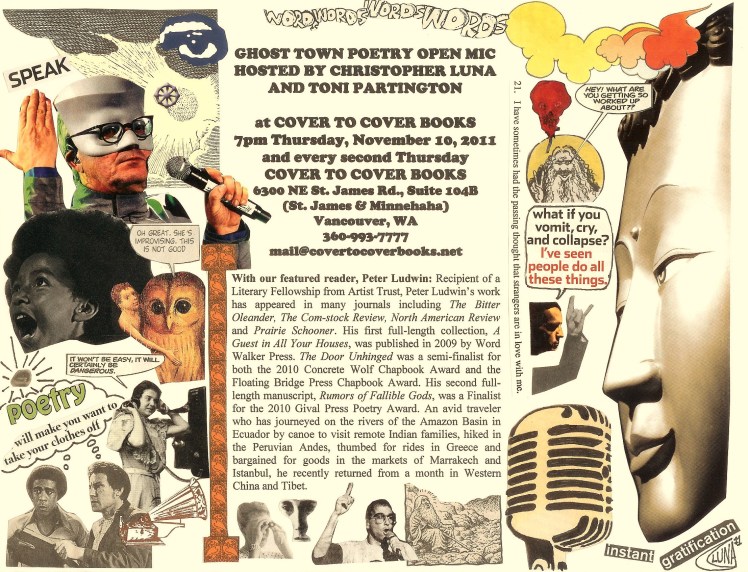 at COVER TO COVER BOOKS

and every second Thursday

With our featured reader, Peter Ludwin:

Peter Ludwin is the recipient of a Literary Fellowship from Artist Trust.  He was the Second Prize Winner of the 2007-2008 Anna Davidson Rosenberg Awards, and a Finalist for the Muriel Craft Bailey Memorial Award.  For the past ten years he has been a participant in the San Miguel Poetry Week in San Miguel de Allende, Mexico, where he has workshopped under such noted poets as Mark Doty, Tony Hoagland and David St. John.  His work has appeared in many journals, including The Bitter Oleander, The Com-stock Review, North American Review and Prairie Schooner, to name a few.  His first full length collection, A Guest in All Your Houses, was published in 2009 by Word Walker Press. A chapbook, The Door Unhinged, was a semi-finalist for both the 2010 Concrete Wolf Chapbook Award and the Floating Bridge Press Chapbook Award. His second full-length manuscript, Rumors of Fallible Gods, was a Finalist for the 2010 Gival Press Poetry Award.  His poem “Terezin Concentration Camp, Bohemia,” was nominated for a 2010 Pushcart Prize.  An avid traveler who has journeyed on the rivers of the Amazon Basin in Ecuador by canoe to visit remote Indian families, hiked in the Peruvian Andes, thumbed for rides in Greece and bargained for goods in the markets of Marrakech and Istanbul, he recently returned from a month in Western China and Tibet.